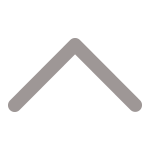 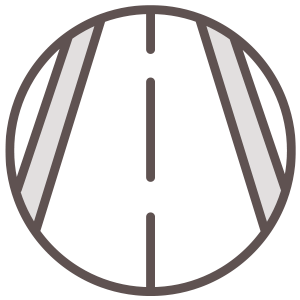 Note: The following guidance features expanded content and minor differences from that in the FHWA Small Town and Rural Multimodal Networks document. Please refer to FHWA's website for the formal presentation of this facility type. 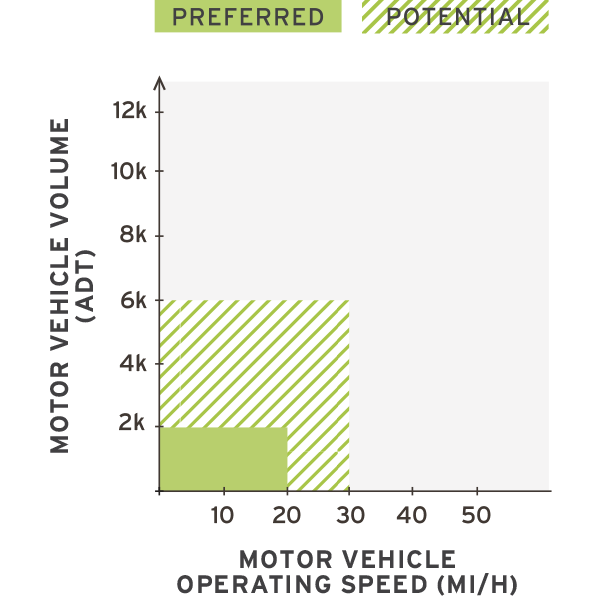 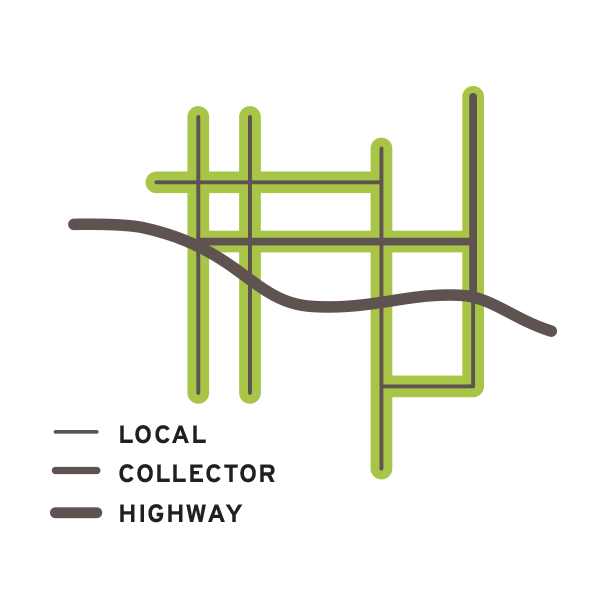 Network
Serves as a pedestrian connection on local and collector routes. 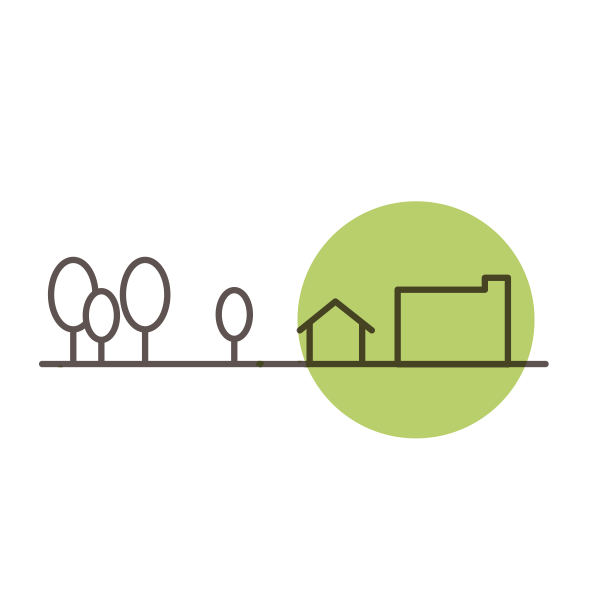 Land Use
For use inside of built up areas to provide a dedicated space for pedestrians.

A pedestrian lane may be considered to operate similarly to a sidewalk. Consult state and local vehicle code for implications in a situation where pedestrians are walking along a roadway with no sidewalk or shoulder available. 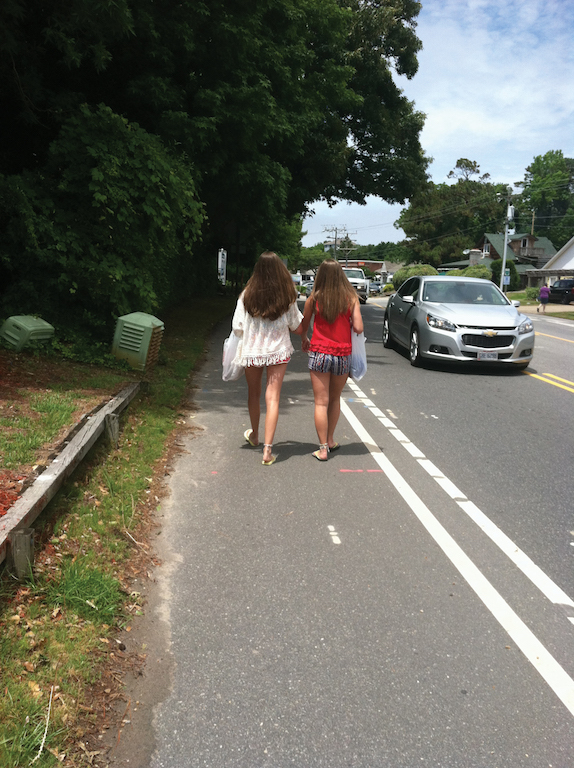 Pedestrian lanes provide interim or temporary pedestrian accommodation on roadways lacking sidewalks. They are not intended to be an alternative to sidewalks and often will fill short gaps between other higher quality facilities. As part of the planning process, agencies should explore issues and the potential challenges a pedestrian lane may face, including:

• Detectability by people with vision disabilities
• Undesired use by bicyclists
• Accessible cross-slope requirements
• Maintenance strategies, such as sweeping and snow removal

Figure 3-11. Pedestrian lanes provide an exclusive space for pedestrians to walk outside of the travel area.

Pedestrian lanes should be designed to support and promote side-by-side walking within the lane. Because of the lack of physical separation, additional width beyond this should be included for added comfort.

Pedestrian lanes are intended for use by pedestrians and must meet accessibility guidelines for a pedestrian access route. This includes:

Separate a pedestrian lane from the adjacent travel lanes with some form of longitudinal marking. + 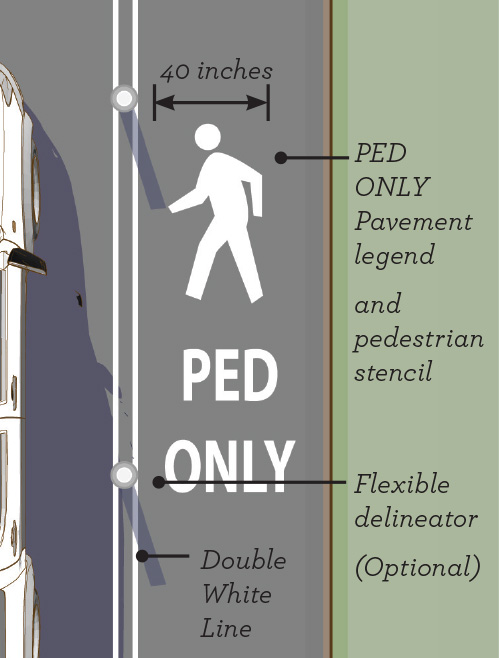 Figure 3-12. PED ONLY legend marking and/ or Pedestrian symbol marking to identify the pedestrian lane to all users.

Pedestrian Warning Sign (W11-2) paired with an “ON ROADWAY” legend plaque may be used to indicate to drivers to expect pedestrians within the paved road surface. 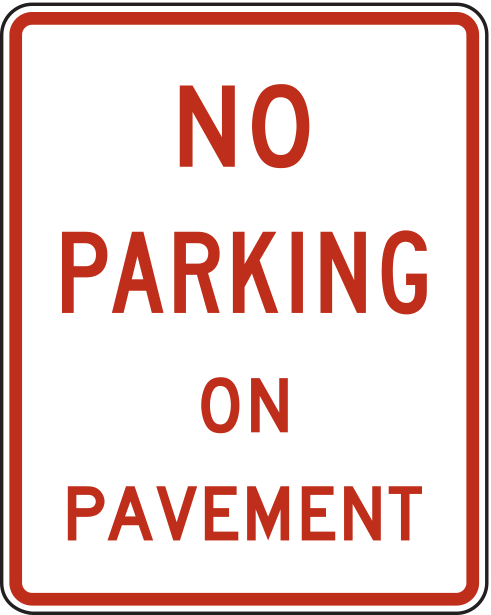 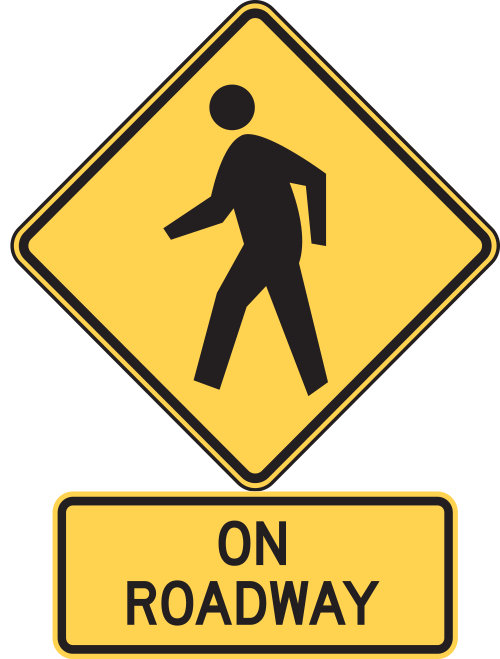 Figure 3-13. A W11-2 warning sign may be paired with a legend plaque to inform road users that shared use by pedestrians and/or bicyclists might occur.

Configure pedestrian lanes with treatments to provide for a safe, clear, and accessible passage at street crossings. 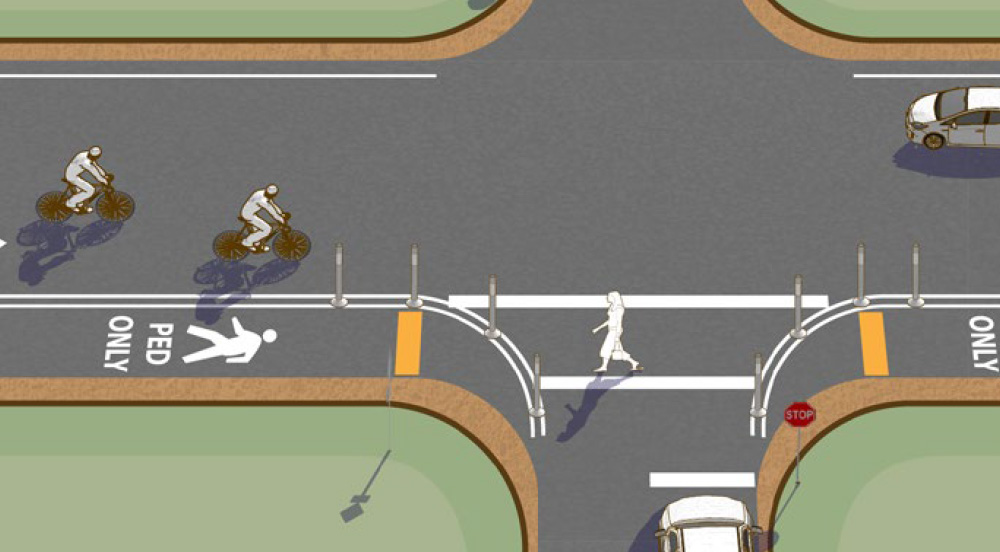 Figure 3-14. Where clarity of street crossings for persons with vision impairments are a concern, detectable warning strips may be used in advance of the intersection area. This transition can indicate a crosswalk, or a transition out of the pedestrian lane into a shared roadway environment.

A pedestrian lane is an on-roadway facility intended for use by pedestrians and must meet accessibility guidelines for walkways. Any deficiencies in meeting ADA guidelines during implementation as a restriping project should be identified in the ADA transition plan and be corrected in the next resurfacing.

Pedestrian lanes are a interim facility, and a full sidewalk construction should be planned for future implementation.

Sufficient space to provide a pedestrian lane may already exist or may be created through configuration changes, including removing or consolidating on-street parking, or narrowing of travel lanes. Implementing pedestrian lanes may share some strategies with the implementation of bike lanes. For more information on potential implementation strategies, refer to the FHWA Resurfacing Guide 2016.

Detroit is a hub of activity during the summer months. Kane’s Marina is one of a limited locations to access the lake. In addition to the boat ramp and docks, Kane’s has a store, a tavern, and a recreational vehicle (RV) park. As the only access to Kane’s Marina, Clester Road is a busy collector street during the boating, moorage, and RV season. This road funnels a lot of vehicle traffic—RVs, boats, trailers, trucks, cars—as well as heavy foot and bicycle traffic to and from Kane’s Marina and the neighborhood and downtown Detroit.

The high volume of vehicles coupled with an identified speeding problem created safety concerns because of the large amount of bicycle and foot traffic that also use Clester Road. The City eventually installed two speed bumps, which appeared to slow traffic down somewhat but prior to the installation of the pedestrian lane, there was no accommodation for people walking or on bikes.

With the award of a Special City Allotment Grant in the 2013-14 grant cycle, the City of Detroit was able to resurface Clester Road and install the pedestrian lane. Adding the pedestrian lane on Clester Road fits in with the long-range plans for a bicycle and pedestrian trail from Lyons and Mehama to Idanha. Additionally the City of Detroit in conjunction with the US Forest Service is developing a city park that will also serve as the gateway center for the Cascading Rivers Scenic Bikeway which runs from Detroit to Estacada.

A rural destination community, especially in the summer, Detroit has a population of 210 year round residents, with the summer population swelling to several thousand. The watersports of the Detroit Lakes and surrounding Federal lands draw hundreds of thousands of visitors to the region each summer.

As part of a resurfacing project, the pedestrian lane was added to Clester Road. Speed bumps were included to encourage slower motor vehicle speeds.

Role in the Network

Clester Road connects Kane’s Marina with neighborhoods and Detroit’s downtown. In the future it will connect the city’s major park and a scenic bikeway’s gateway facility with access to the lake and the amenities of Kane’s Marina.

For more information, refer to the City of Detroit.